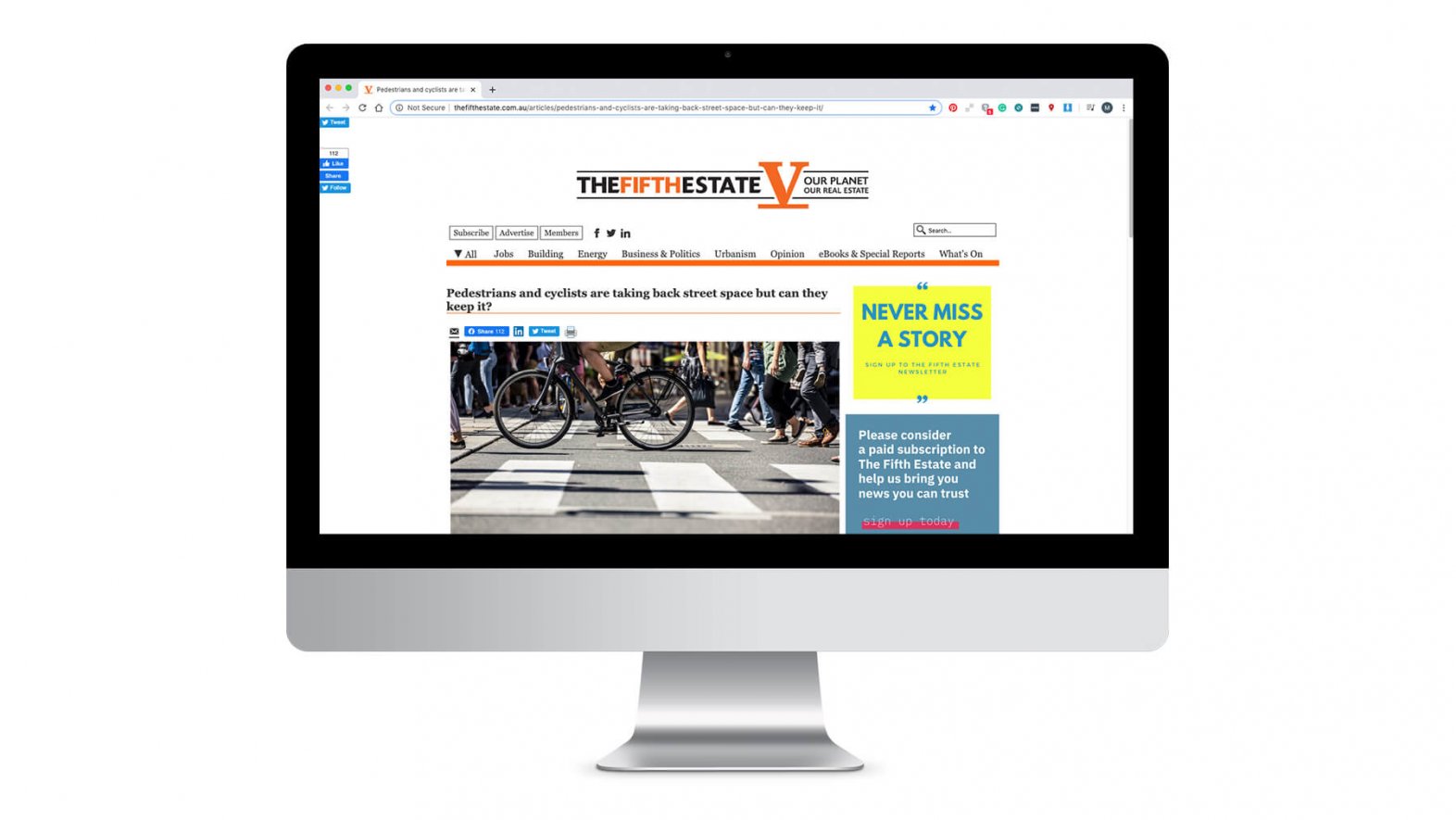 Pedestrians and cyclists are taking back street space but can they keep it?

The push by pedestrians and cyclists to use more street space during the coronavirus lockdowns could prompt a major rethink of how we use our public space after we emerge from the crisis.

During the coronavirus lockdown, as we all jostle for 1.5 square metres on popular urban walking and cycling tracks, the roads are unusually empty of moving and parked cars.

Which is just as well because narrow footpaths are forcing people to step off the curb and onto the road to give incoming pedestrians enough space under new social distancing rules.

Meanwhile, councils are looking for ways to give people more space to exercise safely. A popular walking track at Centennial Park in Sydney’s east, for example, was closed to vehicles over the weekend to give walkers and cyclists more room.

Local governments everywhere are employing this kind of “tactical urbanism” but some people are taking matters into their own hands, using things such as traffic cones to mark out more space.

In New Zealand, there are plans to expand footpaths and create temporary cycleways so people can still keep physical distancing even when the lockdown rules are relaxed.

The New Zealand government will reportedly spend millions of dollars on efforts like these to make streets safer during the pandemic, low-cost measures such as using planter boxes and colourful paint to carve out a bit more space in the street.

While it’s great to see some of our street space reclaimed during the coronavirus pandemic, will these changes stick when a semblance of normalcy returns?

Milan, one of the cities worst hit by the virus, will transform 35km of streets over the northern summer to increase cycling and walking space and reduce car use and pollution after its lockdown ends.

In Australia, the Committee for Sydney is urging the NSW government to take advantage of empty streets and bring forward a scheme to upgrade Sydney’s cycling network. It’s an ambitious plan to complete the network in three years rather than the original 40 years.

The lockdowns are shifting people’s thinking about active transport, in general.

Mike Day, co-founder and director of RobertsDay, says people are waking up to the value of walkable streets and compact suburbs.

People working from home and only able to leave the house to exercise and access essential services are now realising – often for the first time – that they can, in fact, walk to the local shops.

Similarly, those living in low-density suburbs without walkable access to essential services, which are disproportionately the most disadvantaged households, are feeling it more than ever before.

Day says people are flocking to wide, uninterrupted walking and cycling tracks like the Tan in Melbourne, and expects support to build for more dedicated tracks and path networks.

There’s also an opportunity to make all streets more pedestrian and cyclist friendly. This isn’t just about more space – streets also need to be inviting for walkers.

The Brisbane-based architect says the Australian suburban streetscape is dominated by garages, and pathways are often obstructed by cars parked over driveways. Many homes fail to capitalise on the space between their own and neighbouring front yards.

This is “fertile land” for everything from “healthier living infrastructure, edible gardens, micro projects, and better landscapes,” he says.

“Everyone in the suburbs has their own pocket park – it’s their front yard.”

Our relationship with the private car has already been changing but if suburban streets are returned to walkers, cyclists and children, the shift away from the private vehicle as the dominant form of transport will snowball.

That’s because density will increase, as garages – the largest single-use space in the house – are turned into alternative spaces, such as offices, shops, restaurants and retail space.

Before long, density will have increased, and governments will likely service these areas with better public transport.

It might seem like a dream to many Australians but this model of living can be found all over  Europe.

One of the most cycling-friendly cultures, the Netherlands, owes its progressive stance on active transport to a similarly disruptive global event, the 1973 oil crisis. Lavery says the Dutch were heading down the car-oriented route when the oil crisis “brought all that to a head” and triggered a swing to alternative transport methods such as cycling.

“And in that space of time, they had transformed their cities into walkable, liveable places. Cities like Amsterdam are the envy of the world.”

For Lavery, COVID-19 could be the major global event that nudges countries like Australia towards a transit hierarchy that prioritises active transport.

Planner Mike Day is also optimistic that we won’t forget what we’ve learnt after the lockdowns are lifted. Although a fear of public transport is likely to endure and some people might start driving more, Day suspects that this will be offset by the increase in working from home.

He imagines most people will be happy to avoid the commute, at least some days of the week, now that workplaces have recognised that their employees can be trusted to work remotely.

As such, the momentum behind “transit based, mixed use, compact, walkable neighbourhoods” is likely to endure.

All of this will also benefit the 40 per cent of the population that don’t have a car, which includes young kids, teenagers and the elderly.

“Nothing delivers community better than the walkable neighbourhood.”

Although a mix of housing in any suburb would be ideal, Day is particularly keen on the townhouse product that faces the street – setback enough to fit a table and chairs – making it “much more inviting for people to hang out on the street”. If necessary, cars can still be kept in back lanes, out of sight.

He also expects electronic bikes to continue to rise in popularity as a way to travel car-length distances while still getting exercise and fresh air.