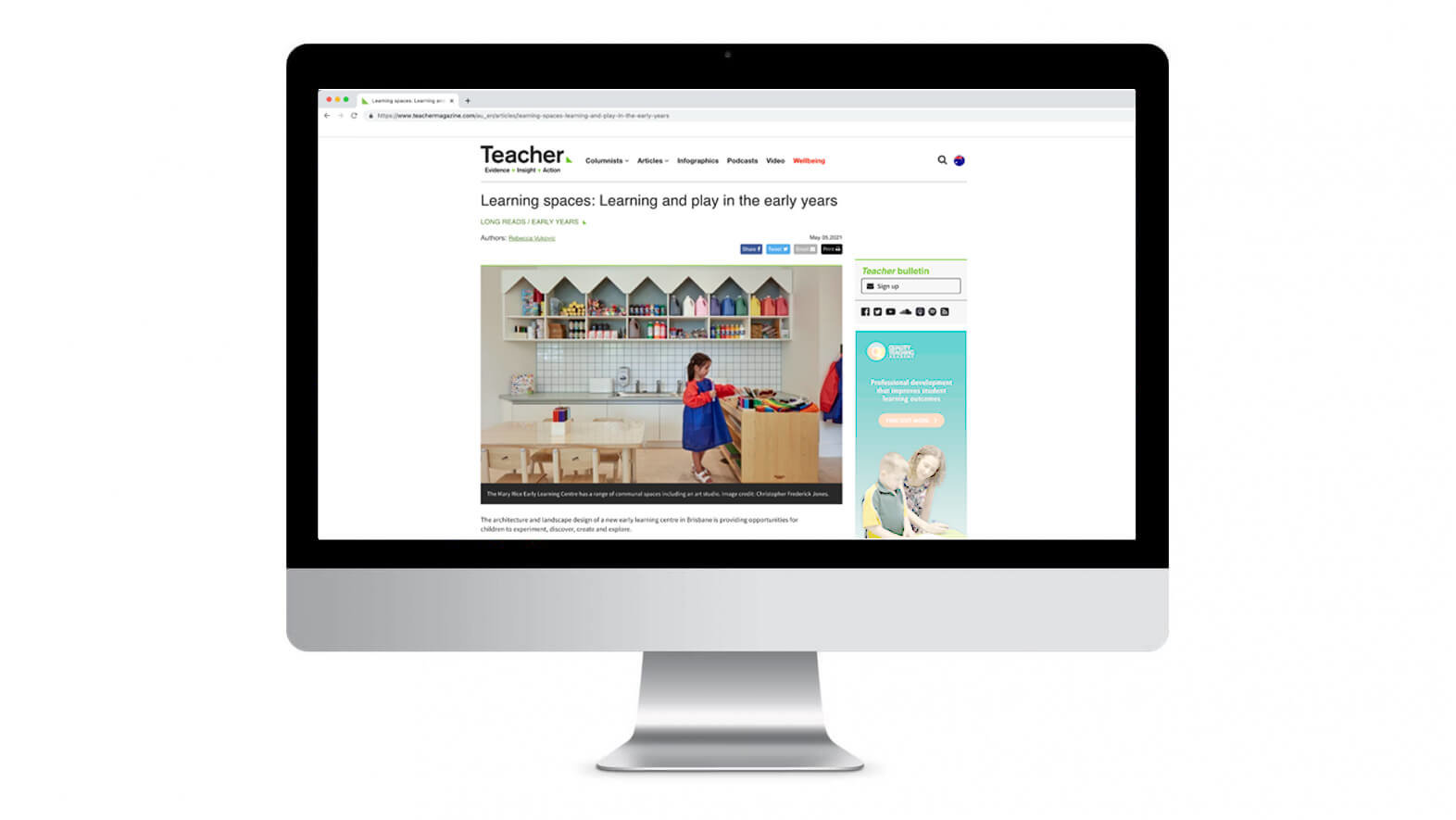 Learning spaces: Learning and play in the early years

The architecture and landscape design of a new early learning centre in Brisbane is providing opportunities for children to experiment, discover, create and explore.

The Mary Rice Early Learning Centre (MRELC) on the St Joseph’s Nudgee College campus opened its doors at the beginning of 2021. The centre caters for 136 children, from babies (children from six weeks of age) to five-year-old Kindergarteners.

The project is a refurbishment of a building that was previously used as an international school. MRELC Project Director Clare Nugent says the existing infrastructure was lying dormant and was an untapped resource for the school community.

‘I think one of the great things is that we were able to start from the beginning and, with the exception of things like major plumbing, it was a bit like an open sketchbook for us. We got to put in all the things that we thought that we not only needed, but also a lot of things that we wanted,’ she tells Teacher.

There are nine activity rooms at the centre, which are supported by community spaces such as an art studio, gallery, theatre, music and reading room, a workshop, a dining hall, demonstration kitchen, and a productive garden.

‘One of the things that sets us apart from other centres is, we have rooms that are set up specifically for specialist lessons that we’re able to provide to our families. One of those examples is the art studio and the other one is the auditorium, which has a library for the children, shared group spaces for the classes, and a music area,’ she explains.

The centre reflects a pedagogy grounded in the Reggio Emilia approach to early childhood development. The design encourages children to explore, investigate, experiment and take appropriate risks in their learning, while building a strong sense of community and belonging.

Australian architecture practice m3architecture began working on the feasibility for this project in late 2017. Design commenced in earnest in late 2018 with completion of documentation by late 2019. The refurbishment was built throughout 2020 and opened in January 2021.

m3architecture Director Ben Vielle and Project Architect Joseph Pappalardo say they drew inspiration for the project from several sources particular to this project – the chosen philosophy, the existing building and the children who would spend time in this place.

‘In many ways the existing building was challenging,’ they tell Teacher. ‘Originally designed as an international college, the existing rooms were too small for early learning functions. We had to find ways to make the building feel better about itself to leverage the opportunity of the vast available floor area and outdoor space – an area that is generous in comparison to most early learning centres for space and functional offerings.’

Nugent says one of the ideas for the project was to ‘bring the outside in’ and promote an outdoor environment to the children.

Extensive structural work was required by m3architecture to re-configure the interior spaces and associated load-bearing walls. This encouraged them to transform structural columns into plywood trees that create a meeting point in each space.

The individual tree structures that identify each activity room are reflective of selected local tree species and can be used by teachers to guide exploration of the extensive surrounding real landscape.

‘We’ve been able to reflect what is outside the campus and bring it inside and it’s really interesting,’ Nugent says. ‘Sometimes I walk in and I’ll see the little people in the room, just with their finger on the trunk of the tree, making a shape or walking around as they go. And it’s quite funny that sometimes when they’re doing little individual play, or they’re looking for privacy, they’ll come and you’ll see them at the roots of the trunks of the tree.’

Vielle and Pappalardo say they used warm timbers and colour throughout the interior to convey a homely, domestic feel. They also designed the interior to suit the scale and developmental requirements of the children in each age group.

‘For example, the central corridor has been transformed into a gallery for the work of the children. A Velcro rail for the support of artwork playfully dances down the full length of the corridor adjusting in height to suit toddlers and babies at the north end to kindy-aged children at the south end. This empowers the children to take ownership of the gallery space and appropriate it with their creativity,’ they say.

Nugent says she’s found that the amount of outdoor space at the centre has encouraged the children to engage in different kinds of play in the outdoor environment.

‘We’ve got a water course and we’ve got rock pools, we’ve got an amazing fort that is a track all around the outer part of the playground with a different surface on it so the children can ride their scooters or their bikes or push their prams out on it,’ she says.

‘And the other thing that I think is really lovely is that the outdoor area has a very, very large scape of natural grass, so everything is very authentic. I’ve always said that when you work in early childhood, what you want to do for these little people who do very long days is, you want to be an extension of the home environment, and we really could be someone’s very large backyard.’

Nugent says since MRELC opened its doors at the start of the year, the feedback from the staff, families and the wider community has been overwhelmingly positive.