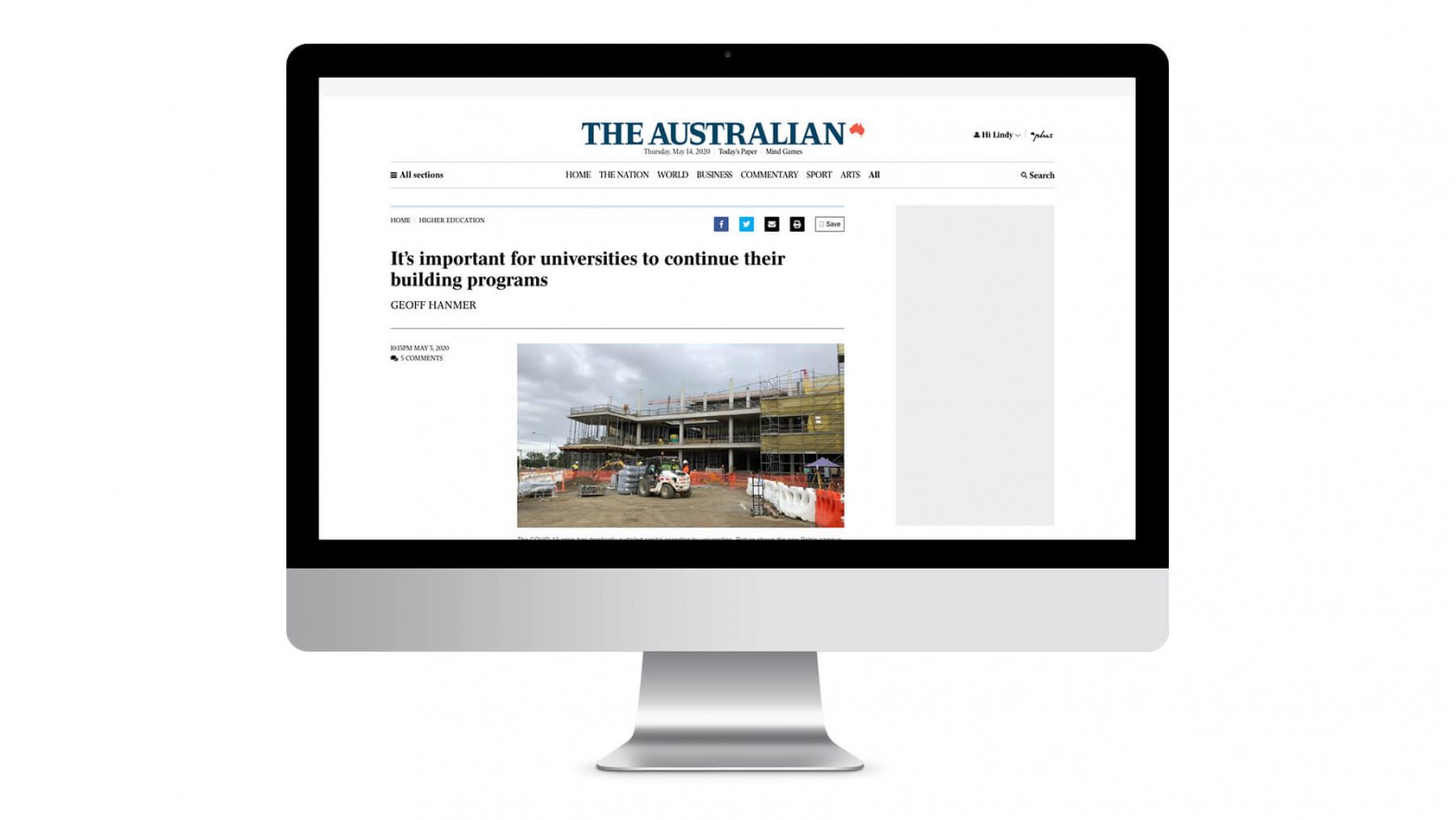 The COVID-19 crisis has drastically reduced income across the HE sector. Estimates vary, but the Mitchell Institute believes that at least $10 billion is likely to be lost to the sector out to 2023.

In response, many universities have announced plans to drastically curtail capital spending, the majority of which is construction work. The National Tertiary Education Union has demanded that all universities axe their capital spending as a precondition to negotiations about concessions over salaries and conditions.

While most, if not all, universities have deferred any building work that has not commenced on site, many have also stopped all planning for future buildings.

Investigations by ARINA suggests that capital spending on higher education buildings over FY 2021 will be about $1.5bn lower than FY 2020. If the capital freeze is maintained, spending in FY 2022 may be almost $2bn lower than expected.

The employment impact is already being felt by the building consultant sector, with many architectural and engineering practices already laying off staff or becoming dependent on JobKeeper. Michael Christensen, who is a director of m3architecture in Brisbane is typical. “We have lost many of our forward higher education projects and all of our forward K-12 education projects. Although we are still working on the delivery phase of the new Andrew N Liveris building at the University of Queensland, this will only take us to May 2021,” he said. Across the building consultant sector, over 2,000 jobs are likely to be lost over the next few months, directly as a result of the freeze on capital programs by universities.

A much more drastic impact will be felt by the construction industry towards the end of this year as existing construction projects complete without further works being brought to market. ARINA estimate that over 10,000 higher education construction jobs may be lost in FY 2021 with a further 5,000 going in FY 2022 before a possible recovery in the following year. Some of these jobs may transfer to other areas of the economy, but with tourism suffering a COVID-19 related downturn, it is hard to see where they will come from.

While it is understandable that universities are trying to protect their budgets any way they can, especially with the government’s intransigence in providing support, the decision to completely slash spending on both planning and construction is a mistake.

For a start, it means that there will be no pipeline of ‘shovel ready’ projects late this year or early next when the federal and state governments may well need to inject money into the construction sector to deliver jobs. It also means that many projects that will underwrite teaching and research productivity will be delayed well beyond the recovery of the sector. Restarting larger capital projects could take months if not years.

A construction stimulus for the higher education sector would not only deliver jobs. It could also be designed to address the long running sore of legacy buildings. While the Higher Education Endowment Fund and its successor the Education Investment Fund resulted in relatively few, but rather elaborate, new buildings, the sector continues to rely on buildings over 40 years old to deliver over half of its floor space.

Many teaching facilities are totally unsuited to contemporary teaching practices or the size of the current student cohort, even if we discount internationals entirely. Many older bio-containment research facilities are only staggering along with the forbearance of regulators. The possibility of a containment accident cannot be discounted, no matter how diligent or careful scientists are.

A targeted program to address the issue of older buildings, with a particular eye to providing fit for purpose facilities for STEM research, would be a worthy contribution by the government to the economic future of Australia, plus it would deliver lots of jobs and reduce the cost burden on the higher education sector. This can only happen if universities keep planning to deliver shovel ready projects when a stimulus comes along.

Although there is likely to be some rebalancing in the nature of teaching with additional support from online material, ARINA believe that almost every undergraduate student will be keen to get back on campus, meet up with their friends and participate in the social aspects of campus life. These are the things that contribute to attraction and retention of students, plus deliver good results on the federal government’s Quality Indicators of Learning and Teaching website.

Laboratory based researchers will also need to get back into their labs. Who knows, they might be in a better position to beat the next pandemic.

Geoff Hanmer is managing director of ARINA, a consultancy specialising in higher education architecture and strategy, and adjunct professor of architecture at the University of Adelaide.