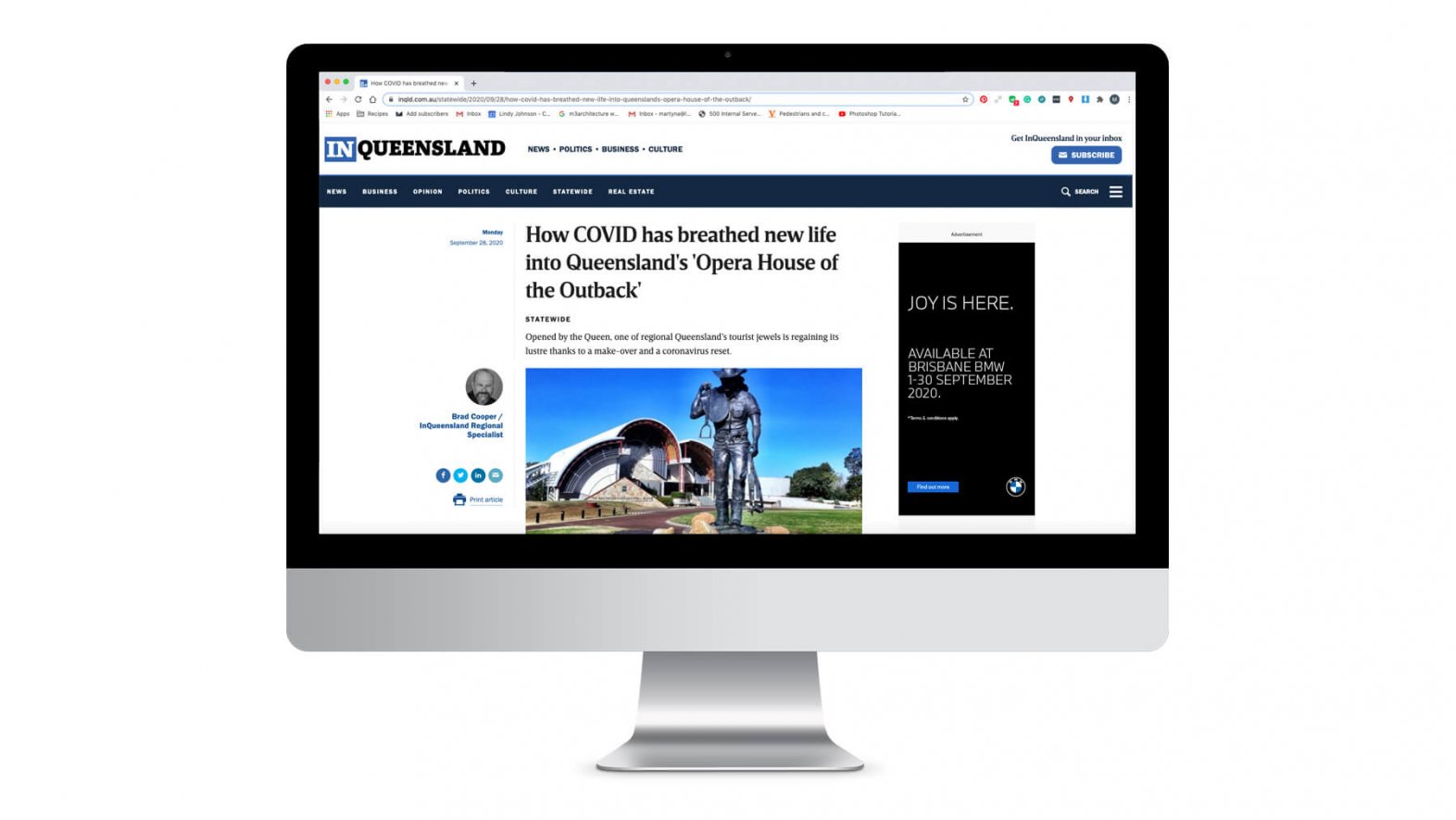 Opened by the Queen, one of regional Queensland’s tourist jewels is regaining its lustre thanks to a make-over and a coronavirus reset.

It was once hailed as the Opera House of the Outback before time took its toll on the appearance and functionality of the Australian Stockman’s Hall of Fame and Outback Heritage Centre in Longreach.

Now the centre that pays homage to Australia’s bush pioneers and pastoralists has a new lease on life, thanks to some timely renovations and a post-COVID promotional campaign that’s hit the mark with domestic travellers.

“In terms of destination marketing, when you talk about COVID silver linings it’s probably one of the best things to happen to outback Queensland,” the centre’s chief executive Lloyd Mills told InQueensland.

Previous visitors to the Hall of Fame are sure to notice sorely-needed renovations that had been planned for the region’s off-season later this summer, but were brought forward to coincide with the enforced pandemic shutdown.

The extra time has served the venue well and means the upgrades were completed in time for when COVID restrictions to travel within the State were lifted in June.

“That’s been a real bonus as we had originally planned for the works to be finished in time for the peak season starting in April 2021,” Mills said.

“So now we have the benefit of the new-look, coinciding with the influx of visitors who we weren’t expecting to see for another year when the pandemic first hit.

“When we closed in February, we battened down the hatches and didn’t expect we’d re-open until April next year.

“Numbers are now very good, better than we ever expected, averaging about 250 a day.”

After being opened by the Queen during Australia’s bicentenary celebrations in 1988, the centre fell victim to a series of disjointed works over the subsequent three decades, gradually hampering the functionality of the building, diminishing its operational efficiency and eroding the visitor experience.

Contracting m3architecture and Brian Hooper Architect to complete the biggest overhaul in the centre’s history, the renovation has installed a new entry to the venue that forms a light-filled, open series of colourful spaces designed to engage and excite visitors.

“Visitors love it. We certainly see the difference in people’s attitudes when they walk through the door.”

Further upgrades to the centre are planned when the next off-season begins in summer, with works to be completed in time for April 1 next year.

Like other tourist operators in the region, Mills is observing a different demographic of tourist making the journey west for their leisure time.

With international and interstate travel still highly restricted, it means travellers once favouring overseas destinations are spending their money in regional attractions, restaurants, pubs and motels.

“The whole region is benefiting and there’s been a lot of pressure on businesses to keep up with demand, especially with COVID-safe distancing restricting numbers,” Mills said.

“My advice to anyone still planning to head out west for a holiday is to book ahead as much as you can to avoid disappointment.”